When Seth Wynes was teaching high school science in Canada, there was one question his students asked him that he had trouble answering: What can I do to stop climate change? The existence of climate change was an unpleasant surprise for many of them—they had grown up hearing adults talk about things like peak oil in doom-laden tones, so the news that humans would trash the atmosphere before they even reached peak oil filled them with alarm. They wanted to do something.

Wynes had a few ideas that he felt were good: Bike more. Take transit. Eat less meat. Change your lightbulbs. Recycle. But it bothered him that he didn’t really know how effective those solutions were. It bothered him even more that nobody else seemed to know either.

Wynes decided to go back to school. This time, he focused on climate change. He chose Lund University in Sweden so that he could study climate change in a country that not only believed climate change was real but was actively trying to fix it. With the help of Kimberly Nicholas, one of his professors at Lund, Wynes sought out and analyzed research quantifying the effects that lone, individual actions could have on carbon emissions. He spent long nights with research papers like “Electricity and Water Consumption for Laundry Washing by Washing Machine Worldwide” and “Finding Your Dog’s Ecological ‘Pawprint’: A Hybrid EIO-LCA of Dog Food Manufacturing.”

Months later, Wynes and Nicholas had the list his high school teacher self had always wanted: 12 individual actions, ranked in order of effectiveness and whenever possible, in effectiveness by country. For example, an American or an Australian who gave up their car saved much more in terms of emissions than a resident of Great Britain did, because residents of the United States and Australia drove so much more to begin with. In all three countries, there was one action whose effect towered over the others: Have one fewer child. 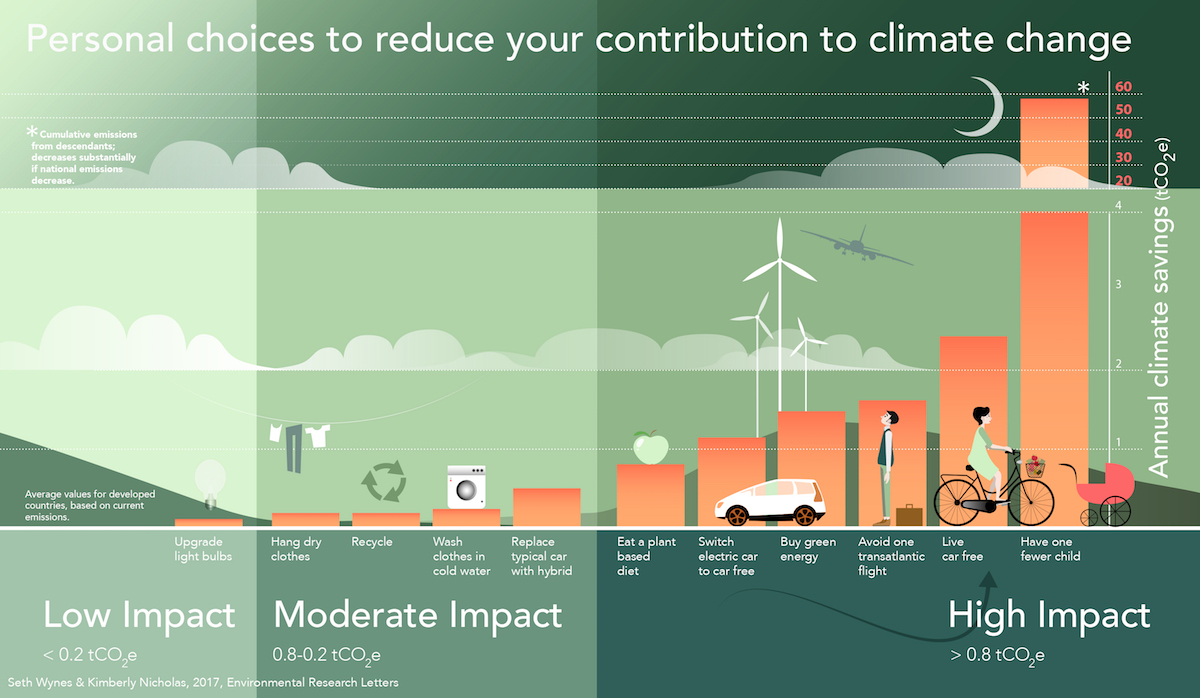 The 12 actions weren’t the only lifestyle choices that Wynes and Nicholas studied—just the ones that held up to mathematical analysis. Composting fell by the wayside after Wynes couldn’t find a paper rigorous enough to cite. Dog ownership was deemed similarly complicated after Wynes and Nicholas only found two papers with opposite verdicts, though they both felt safe concluding that smaller dogs were better than large ones. The math around green energy got hazy in European countries because of a problem with double-counting in some areas, but was clear-cut enough in areas with carbon-heavy electrical grids like North America and Australia to merit inclusion.

Then Wynes began comparing their resesarch to climate-related documents aimed at teenagers and adults in the three most high-emitting countries on the list: Canada, Australia, and the United States. He wanted to know—were the actions on his list the same as the actions these documents recommended?

They were not, as Wynes and Nicholas reveal in a paper that was published this week in the journal Environmental Research Letters. The most high-impact actions on his list, like living without a car, avoiding transatlantic flights, and eating a plant-based diet were often ignored entirely in educational climate change materials, which favored less-effective actions like recycling and using more energy-efficient lightbulbs. Government documents for Australia, the United States, and Canada all recommended driving more energy-efficient cars, but only one country—Australia—suggested living without a car at all, even though doing so had a cascading effect on emissions by keeping people within densely populated areas, where the structure of the city kept per-capita energy use at half the level of people living in single-family detached suburban housing.

Wynes combed through 10 Canadian high school textbooks used by 80 percent of Canadian teenagers (the sheer number of American high school textbooks kept him from doing the same here, but he encourages anyone else to do so). He found 216 individual recommended actions to mitigate climate change, and a similar focus on changes with moderate impact on the climate, as opposed to those with a higher impact. Eating a plant-based diet was presented as roughly equivalent to eating less meat, even though a completely plant-based diet can be 2 to 4.7 times more effective at reducing greenhouse gas emissions. Driving more efficiently was mentioned almost 30 times, but living without a car entirely was mentioned only six times. Out of the 216 recommended actions, only eight were ones that made Wynes’s and Nicholas’s top four.

The single most important thing that an individual could do—have one fewer child than intended—was not mentioned at all. On one level, this is easier to understand—several countries have a tradition of relying on an expanding birth rate as a way to subsidize the retirement of its older citizens. Systematic attempts to reduce birth rates in many countries have a history of being applied selectively, in ways that can only be described as racist and classist. But still, a concerned teenager might want to know that a U.S. family choosing to have one fewer child than they originally intended would, as Wynes and Nicholas put it, “provide the same level of emissions reductions as 684 teenagers who choose to adopt comprehensive recycling for the rest of their lives.”

When I asked Wynes about why he thought publications aimed at teenagers had such a strong emphasis on climate actions with only moderate impact, he hesitated, then hypothesized that the problem might be hope. Specifically, the hope that new technology would be the solution to this new, energy-related problem, the way that the Green Revolution was a solution to the limitations of agriculture, or the way that the catalytic converter cut urban air pollution. Only one of the four most-effective options—buying energy from renewable sources—requires the kind of technolgical innovation that has gotten us out of environmental pinches in the past. We already have the technology to have fewer children and to get around using fewer cars. Many short-distance air routes could be replaced with high-speed rail, and the knowledge to make that work well has been around since the 1970s.

Whether or not the kids are learning it in school, we may already be living in a world where expectations are adjusting. In the United States, the percentage of 20-somethings with driver’s licenses has fallen by 13 percent over the past three decades, and they prefer to live in cities, even if they can’t afford to live there. Even if young people do eventually buy cars and move out to the suburbs as they get older, by driving less now they’ve reduced the pollution they’ve contributed to in their lifetime.

In my years writing about climate and the environment, I’ve seen a lot of what Wynes’s and Nicholas’s paper describes. I have been told by scientific papers to buy a more-fuel-efficient car, as though the existence of people like myself who have never owned a car in the first place does not exist. I have seen teenagers being told they can fight climate change by shopping at thrift stores and taking shorter showers. As a communication strategy, it felt a bit off—teenagers as I know them are idealistic and intense, more comfortable at making dramatic statements and life changes than most adults are.

What would they do if they knew the whole truth about this troposphere we’re handing off to them? I eagerly await that study.